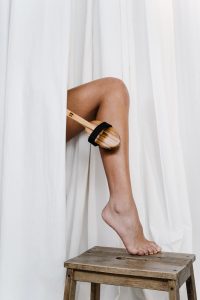 To ease the burden on your kidneys and make your skin glow with warmth on a cold morning, try skin brushing. First thing on rising – before showering, not during it – spend five or more minutes brushing your skin vigorously over most of the body. In no time at all you will be glowing with warmth, and relishing one of the secrets of healthy, glowing skin. Another brush-over at bedtime will do even more for the skin, and those cold sheets won’t make you feel so chilly when you climb into bed.

Some people find early-morning brushing to be almost as stimulating as the caffeinated cuppa that others depend on to get them started. In fact, brushing becomes almost addictive, and when used to regular brushing, people don’t feel comfortable until they’ve had the invigoration.

Regular skin brushing cleanses the blood and reduces the burden on your kidneys. Like the kidneys, the skin is an organ of elimination, and if we stimulate it in a constructive way, the skin increases its rate of elimination of toxic waste products. Fewer demands are then placed upon the kidneys.

Further, if kidney function is improved, the eliminative load on the skin will be reduced, which is a major determinant in preventing skin diseases.

These facts have considerable significance in our affluent society where toxic substances including alcohol, caffeine, uric acid and other wastes from meat, food additives and pollutants place great strain on the kidneys. Even over‑eating healthy foods can load up our eliminative organs.

Cellulite can develop where there is stagnation of lymph flow and concentration of excess proteins, fats and waste products, most commonly in the buttocks and thighs. The result is often seen as puckered skin or the ‘orange peel’ effect.

The people who will be likely to see the most dramatic results from skin brushing will be those with skin disease – but remember, never touch diseased areas of skin with the brush, as this could injure these areas. Eczema, acne, boils, psoriasis, dermatitis (skin inflammation) and most other skin problems are crisis eliminations resulting from excessive congestion in the skin. The congestion, in turn, is commonly the result of poor skin function or the kidneys being unable to cope.

A marvellous example of relieving a skin condition occurred in a 78-year-old woman – my late mother – who was plagued by red, stinging, inflamed patches on her fingers and hands, with nasty cracks up to 2 to 3 millimetres deep.

She had already removed any possible causes from her diet and was avoiding any contact with detergent, soaps or other chemicals. She didn’t want to go on a ‘cleansing’ diet because she was already very thin. As a last resort, she tried skin brushing.

Morning and evening, 15 minutes at a time, she massaged the skin over most of her body with a dry natural bristle brush, at the same time exposing her skin to the direct rays of the sun. She was careful not to brush the inflamed areas of skin, as this would have aggravated the inflammation.

Within a week the inflammation had gone and the cracks in her fingers and hands were healing. After about two weeks, all traces of dermatitis had vanished and the trouble never returned. It was an amazingly rapid recovery considering she had had the problem for many months.

Just what is this bodily coating we call skin? In each square centimetre, there are about three million cells, many hairs, 15 oil (sebaceous) glands, 100 sweat glands, one metre of blood vessels, 3,000 sensory cells, four metres of nerves, 200 pain detectors, 25 pressure sensors for touch, two cold sensors and two heat sensors!

How long to brush? A minute on each limb, a minute on the front of the trunk and a minute on the back (a total of 6 minutes) would be excellent. If you are in a hurry, half this time would still be useful. Brush all your skin, including the neck and feet, but not your face or other delicate areas, like nipples, because they could be irritated.

Brushing after showering can be difficult because some of the natural oil has been washed off the skin, causing the brush to drag. Also, a wet brush loses some of its punch.

To minimise discomfort when you first commence brushing, use a gentle movement and gradually increase the pressure until you can brush vigorously. By the end of a week or two, you will be amazed at what your skin can take comfortably.

It is important to obtain a good quality natural bristle brush. High quality, 100% natural and vegan brushes are available via this site  (Affiliate link)