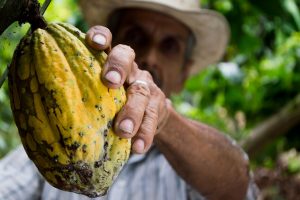 Cocoa and cacao are the same, except that raw cacao powder has not been subjected to high temperatures, so is nutritionally better than natural cocoa powder which has been dried by heat.

Cocoa – as used in chocolate – comes from a tree named Theobroma cacao. The word ‘cacao’ originated in Mexico, and later made its way to Spain, where cocoa or cacao is referred to in Hispanic only as ‘cacao’. It is believed that the English spelling ‘cocoa’ is the result of a spelling mistake.

The heating results in big differences in their contents of antioxidants. Raw cacao, one of the richest of all foods in antioxidants, is much richer than cocoa powder, and cocoa is richer than Dutch-processed cocoa powder (see below). But because cacao also contains high levels of theobromine and oxalic acid, it should not be consumed in large amounts.

Raw cacao is extremely rich in beneficial flavonoids, which are potent antioxidants. In fact, cacao powder contains far more antioxidants than acai berries, goji berries or blueberries, the content in cacao being a whopping 10% by weight. Two flavonoids in cacao are particularly beneficial – catechin and epicatechin.

Absorption of antioxidants is inhibited by cows’ milk, so if milk is an ingredient in a recipe, use non-dairy milk such as almond milk, oat milk, rice milk or soy milk – or just plain water.

The cocoa nibs are ground to paste and then the cocoa butter (the fat component) is removed by hydraulic pressing, which generates high temperatures, possibly in excess of 150ºC, and roasts the cocoa. Natural cocoa powder is very bitter and mildly acidic (pH 5.3 – 5.8).

Extra processing produces what is called ‘Dutch-processed cocoa powder’. Initially, the cocoa beans are soaked in a potassium carbonate solution to neutralise the acidity, making the powder darker in colour and less bitter. It also results in an ORAC rating only about one-tenth that of natural cocoa.

In the production of raw cacao powder, the cocoa butter is extracted by cold-pressing, allowing the temperature to be kept below about 40ºC. This creates the essential differences between raw cacao and cocoa.

But both contain some nasties – caffeine, theobromine and oxalic acid.

Caffeine was dealt an appropriate blow in the Autumn 2014 issue of this magazine.

Theobromine is related to caffeine, and, like this powerful stimulant, it fires up the nervous system and heart. Similarly, theobromine gives you a lift for many hours and then dumps your energy levels, so that you want to reach for more stimulants. Headaches are a common consequence of caffeine and theobromine.

Theobromine is dangerous for dogs and some other animals because these animals cannot break it down and it can cause heart failure. This is why dogs should never be given chocolate, even as a rare treat.

Oxalic acid, with a pronounced bitter taste, inhibits the absorption of calcium and some other minerals, and the resulting calcium oxalate can precipitate out and produce kidney stones. In large amounts oxalic acid becomes toxic to humans, although small quantities can be beneficial in a number of ways, including reduced tumour formation.

In short, it supplies a lot of antioxidants; it regulates fatty acids and blood glucose levels; it improves insulin sensitivity; it promotes weight loss; and contains the feel-good compounds dopamine and phenylethylamine.

Cacao is rich in folate and minerals. Magnesium is at higher levels in cacao powder than in almost any other food. Also abundant are iron, sulphur and potassium.

The Negatives of Raw Cacao.

In spite of these benefits, there are people who have investigated cacao and believe it can be quite harmful. Here is a brief account of what some say. Note that somewhat similar comments would also apply to cocoa.

Cacao in large doses can be addictive. The culprits are the caffeine, theobromine and phenylethylamine.

As a stimulant, cacao fires up the adrenal glands, leading to insomnia, nightmares and shaking fits. After the adrenals become depleted, the person feels fatigued.

Cacao is toxic to the liver – long-term use of large amounts can cause mood swings, angry outbursts, depression, paranoia and dizziness.

One consumer of large amounts – two tablespoons daily – suffered insomnia, as would be expected, and painful leg cramps after about two weeks.

Cacao and cocoa are apparently a classic case of a little is harmless or even beneficial, but a lot can be damaging. The two tablespoons daily mentioned above is a whopping dose for such a concentrated substance.

However, cacao and natural cocoa would be much better to use in baking or in hot chocolate rather than using drinking chocolate, which contains added sugar and fat. Especially use raw cacao in raw recipes so as to retain its advantages.