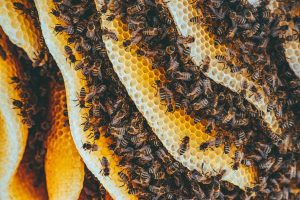 WHERE DOES MANUKA HONEY COME FROM?

The Manuka bush flowers only between December and January, so beekeepers have just six weeks to make a year’s supply. Trickier still, not all Manuka bushes produce the medicinal honey.

Both white sugar and honey contain the simple sugars, glucose and fructose, but in white sugar they are combined to form sucrose, whereas in honey they exist separately and require no digestion. Further, white sugar has no healing properties and contains zero minerals and vitamins.

WHY IS IT SO SPECIAL

When the bees take nectar back to the hive, they add an enzyme, called glucose oxidase, while they are concentrating the nectar into honey. When honey comes into contact with body moisture, the glucose oxidase slowly releases the antiseptic, hydrogen peroxide. This is released at sufficient levels to be effective against bacteria but not damaging to tissue.

In certain strains of Manuka honey, the antibacterial activity is much more potent than the peroxide effect. This was labelled the ‘Unique Manuka Factor’, or UMF, and is now known to be a compound called methylglyoxal. This compound is toxic on its own, but in honey it combines with other compounds synergistically to be so strongly antibacterial that, as one researcher said, it causes ‘multi-system failure’ in bacteria. Manuka honey is world famous for this powerful antibacterial activity.

Unlike hydrogen peroxide, the methylglyoxal does not break down, so that the antibacterial activity of the honey remains intact. The UMF property is very stable to heat and bodily fluids and not easily destroyed.

Prof Dee Carter, of the University of Sydney’s School of Molecular and Microbial Biosciences, said that these discoveries explain why bacteria fail to develop the resistance that is inevitable with conventional antibiotics.

“New antibiotics tend to have short shelf lives, as the bacteria they attack quickly become resistant,” stated Professor Carter. “Many large pharmaceutical companies have abandoned antibiotic production because of the difficulty of recovering costs. Developing effective alternatives could therefore save many lives.”

In addition to being potent and stable, the UMF can reach deep-seated infections, because it can penetrate one centimetre into skin, fat and muscle overnight, whereas hydrogen peroxide does not penetrate tissues.

In laboratory tests the UMF property has been found to be effective against a wide range of bacteria including:

Helicobacter pylori – the bacterium that causes most stomach ulcers. Hydrogen peroxide is not effective against it.)

Twice as effective against Staphylococcus aureus and Escherichia coli. MRSA strains of bacteria are notoriously resistant to antibiotics and sometimes responsible for closing hospital wards.

JUST WHAT DOES THE HONEY DO

The higher the UMF rating, the higher the antibacterial activity. Products with a rating of 10 or higher are appropriate for therapeutic use. For serious wounds and illnesses, it is recommended to use medical grade Manuka honey which has been sterilised by gamma irradiation.

The honey is anti-inflammatory and reduces pain and swelling. It does not damage the surrounding tissue.

Honey cleans wounds – its osmotic effect lifts dirt out of the wound. Dressings do not stick to the surface of the wound, allowing easy removal of dressings. Because the wound is kept moist, scarring is reduced.

Manuka honey is akin to a super healer.

The Natural Health Society of Australia and this website does not purport to provide medical advice or opinion and readers should not rely upon any information from this website for that purpose. All content on this website is published for informational purposes only. It is not intended to be a substitute for professional medical advice and should not be relied on as health or personal advice. More information is available through the privacy policy and disclaimer link below.